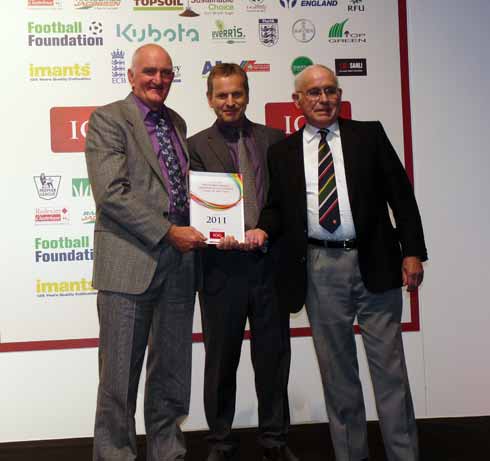 Cleckheaton groundsmen Keith Johnstone and John Hawkesworth have been awarded a top accolade for their work at Moorend.

They were named Volunteer Sports Ground Management Team of the Year at the prestigious Institute of GroundsmanshipIndustry Awards held at Bolton Wanderers Reebok Stadium on Friday night.

TalkSPORT’s Mark Saggers, who was MC for the event, commended Keith and John’s commitment to Cleckheaton and their wider support for groundsmanship in the North of England via the JCT600 Bradford Cricket League, Yorkshire Cricket Board Groundsmen’s Association and the IOG West Yorkshire Branch.

Now retired, Keith says he wonders how they ever found time to go to work.

Keith, who is previous winner of the JCT600 Bradford League’s Sir Leonard Hutton Trophy for outstanding service to the league,  and John can be seen out in all weathers working around the club’s grounds.

JCT600 Bradford League media and Marketing officer Alan Birkinshaw said: “This is a deserved accolade for two men who work so tirelessly for their club.

“They are a fine example to others with their dedication and professionalism. They should be rightly proud of their achievements.”

He added: “The Management Board congratulates them on winning this accolade. They have put their club and the league in the national spotlight and though they are two men who tend to work tirelessly in the background, they should enjoy this moment in the limelight.”